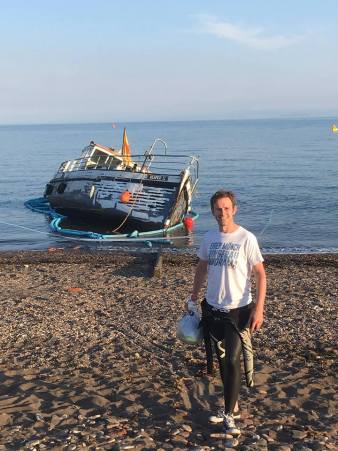 I’ve not been ill at all this year until… two days before the race. Thankfully, it was only a head cold but it meant I had a worrying 24 hours on Friday wondering whether I’d be fit enough to take part.

I felt much better on Saturday so I headed through to Edinburgh to register. I didn’t mention my illness to Andrew. I didn’t want him to get the psychological boost of knowing I wasn’t 100% fit.

Registration was quick and easy. I spent longer in the queue to the expo shop than I did registering. I’m always amazed at the amount of tat for sale at the expo. This year’s prize for worst product goes to the IronMan door mat.

We stayed in Macmerry, a small village near the swim start. The village is tiny but it contains one of the most important facilities in Scotland – the Royal Bank of Scotland datacentre. Billions of pounds of banking trade goes through the site.  There are no signs on the building to indicate its purpose. It looks like an anonymous industrial unit.

I used to visit the site when I worked for RBS. I joined RBS the day the bank collapsed. I don’t think those two events are linked. I’m pretty sure the damage was done before I got there.

Its the worst place I’ve ever worked! I left after six months but not before accidentally getting stuck in the door entry tube to the datacentre. I was there until a security guard rescued me. I don’t miss the place.

This year we were also one of the last in as there was still a lack of toilet facilities at the start. Hearing ACDC play “thunderstuck” is supposed to be one of the iconic moments of any IronMan race. It’s less iconic when heard in a portaloo as I tried to get my arm back into my wet-suit sleeve.

It took 30 minutes to get into the water as they only let three people in at a time. This worked out well as there was plenty of space on the swim. I never felt boxed in at any point. Although one guy did swim past me perpendicularly. I’m not sure where he was going!

I enjoyed the swim. The sea was calm. The water was warm and I felt great.

On the bright side, this meant my bike was not weighed down with extra bits. I collected a water bottle at the first feed stop so it worked out fine.

The bike route is pretty flat (compared to where I normally ride). The long climbs aren’t very steep and the steep climbs aren’t very long. The first 30 miles are the best part of the course- good road surfaces and nice views over the East Lothian countryside. The route back into Edinburgh had some ‘interesting’ sections – some cobbled roads, a farm road and some pavement.

I was confident I was well ahead of Andrew so my plan was to run the first two laps of the course and then see how I felt on the last.

It very hot and there was no breeze on the bottom part of the course. The BBC claim it was 21C. Which coincidentally is also the race distance!

I didn’t spot Andrew until the 2nd lap. I was at least 20 minutes ahead of him. I knew at that point I’d won so I took it easy until the finish.

The course was good, the event was well run and I got home in time for my dinner. What more can you ask for in a race?

One major improvement this year is the t-shirt. Last years’ effort was shockingly bad. It looked like the sort of design a contestant from The Apprentice would come up with when they only have five minutes left in a design challenge but hadn’t done any prep work on it. 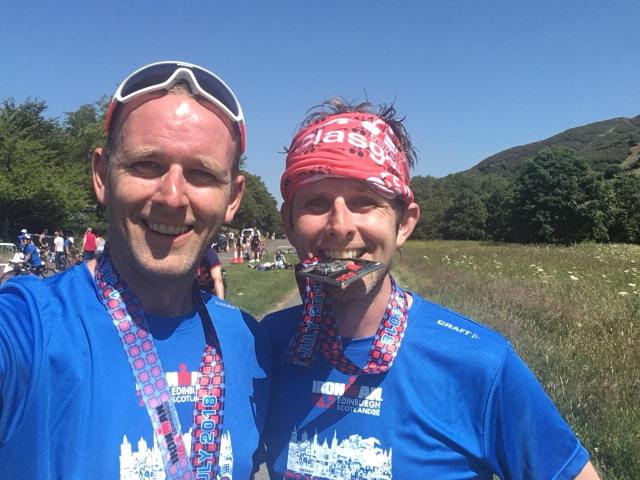