My mum was born in the Outer Hebrides. She is a native Gaelic speaker who didn’t learn English until she went to primary school. If she spoke Gaelic in school, a teacher would punish her with a cane! She very quickly became a fluent English speaker.

I was born in Glasgow but grew up in the Outer Hebrides. I’m a native English speaker who didn’t learn Gaelic until I went to primary school. Nobody hit me with a cane. I failed Gaelic. I blame the lack of “motivation”. I know only two Gaelic phrases: “How are you?” and “I am cold and wet.”

Which, in Scotland, is all you really need.

I was reminded of this whilst battling wind and rain at last weekend’s Hebridean Triathlon.

This was the second time the event has been held. Last year I came in the top 10…because there was only 10 competitors!

In the last year the organisers have done a great job encouraging participation from both men and woman. 25 people took to the start line with an almost equal split of men and woman.

Last year the swim was in a loch by the sea but this time it was in the sea by the loch. Which is a bit of a tongue twister but it was a great move from the organizers as the sea was much more enjoyable to swim in.

Last year I wrote: “I took a detour on the first lap…”

I was determined to sight better this year. I did! This time I took a detour on the second lap. 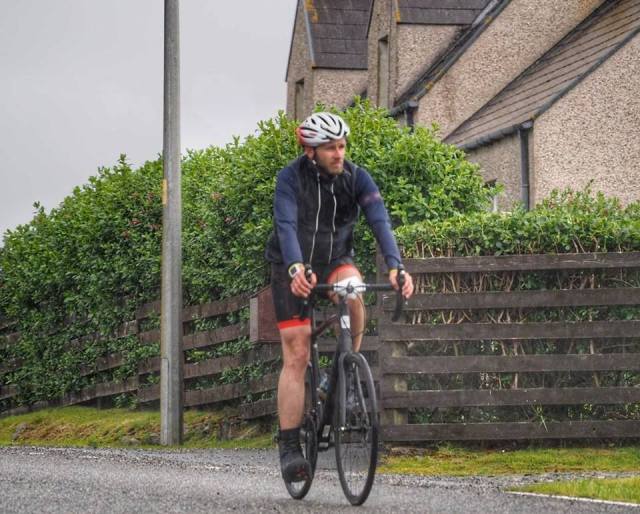 The bike course is an out and back route to the Callanish Stones. It was an undulating route into a very strong headwind. If that wasn’t hard enough. The heavens opened and the rain/hail started.

The wind was so strong. it took nearly an hour to do the out route but only 35 minutes to get back.

By the end of the cycle I was battered by the elements. All I could think was “Tha mi fuar agus fhluich” I’ll let you work out which of my Gaelic phrase that translates to.

I’d finished the bike just ahead of a fellow athlete from the Glasgow Triathlon Club. I was determined to stay ahead so set off at a steady pace.

I felt quite good on the run and managed to overtake a few people who were ahead of me.

I was happy with my performance. My time was down on last year but due to the weather so was everyone else’s.

I’ll leave the last word to one of the competitors who wrote:

“Thank you all for putting on one of the best triathlons I have participated in. The course is hard to beat and the relaxed atmosphere was just perfect. Well done to everyone involved.”