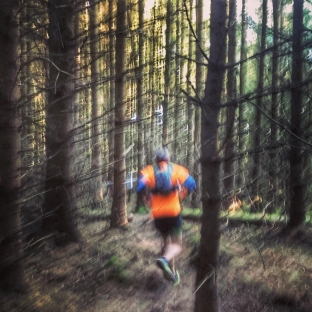 I’ve only ran in Mugdock Country Park three times. The first time, I got lost. The second time, it rained. On my last visit, I got lost and it rained.

I have a reputation for attracting rain. I used to be a member of a walking group called Glasgow Young Walkers. Rain occurred so regularly on my walks that I received the nickname – the rainmaker.

I was reminded of this at the registration desk. One of the volunteers recognized me from my time in the club. She asked if I still went on walks.  Unfortunately, whilst I was on the committee of the group, I created a rule stating anyone over 40 was no longer young. So when I turned 40 I had to throw myself out of the club! I doubt my rain making skill is missed, all the walks are now dry and sunny.

As I registered I noticed that I was the only man registering. In fact, from my walk to the car to the desk I didn’t see a single male runner but numerous female runners.

I put it down to registering early and assumed the men were all waiting until the last moment to register.

Before the race started, the organizer gave us all a quick safety talk. I didn’t pay much attention to it until he said “There’s a prize for anyone who gets a selfie with a highland cow”

Unfortunately I did not spot any cows on the way round the course. My collection of selfies with animals will have to limit itself to a horse, a talking monkey, a cartoon cat and cookie eating rooster.

Race directors take note – This was a great idea from trailfest (unless someone had been mauled by a cow outraged at being photographed without first having a chance to put on makeup and brush their hair). I want to see more imagination in awarding prizes at races. Forget awarding the prize to the fastest. Anyone can do that. It just involves running a lot. Award prizes to the best costume, the best on course photo, the laziest runner. Anything that make the event more fun!

During the race I was reminded how few men were on the course when at one point a marshal shouted at me “watch out the women are catching you!” I shouted back “I’m just pleased to be keeping up with them!”

Afterwards, I checked the results and there was 59 female runners and 39 men. The only other race I can think of that has more female runners than men is the Womans 10k. It is a great tribute to the organisers that the race attracts such a big turnout of women.

I have noticed trail races and ultras tend to attract a high number of female racers. I think it is because the events feel less competitive than a normal road race. I’d be interested to know what other people think the reason is.

I didn’t even get lost the man in front of me got lost and that doesn’t count does it? I was just following him!

For more events check out https://trailfestscotland.com/