Andrew and I grew up on the Isle of Lewis. It’s the furthest north and west you can go in the UK before you get to Iceland. We moved away from Lewis to go to university but our parents still live there.

The Isle of Lewis is renowned for three things – Harris Tweed, Gaelic and having the oldest group of rocks in the UK. The rock is called Lewisian gneiss. The second oldest rock group in the UK is The Rolling Stones.

In Summer 2016  I met a cyclist at Stornoway ferry terminal. I asked him where he’d been cycling on the island. He said: “I did the Hebridean way. A 185 miles route from Barra to Lewis.” I asked if he’d enjoyed it.  He said: “I’ve cycled in the arctic circle in Norway. I’ve biked the far north of Canada but I’ve never been as cold and miserable as cycling here!”

I gave gave him some words of encouragement “If you think this is cold you should try it in winter!”

The Hebrides is the best place in the world on a nice day but on a bad day….

After speaking to him I looked at the route of the Hebridean way. I was disappointed. It missed out lots of great places and bike routes. So here is my improved version of the parts I know well (Barra & Lewis/Harris).

The ferry from Oban arrives early evening into Castlebay. The official route recommends starting your trip the next day in Vatersay before heading north to catch a ferry to Uist.

DON’T DO THAT! Stay in Barra for two nights so you have a full day to explore the island before leaving.

Day 1: Head to Vatersay to see the official start. Make sure you have walking shoes with you as there’s a nice beach to explore here. From the start head clockwise around the island aiming to get to the airport for lunch time. They have a great onsite cafe. Check the plane timetable so you can watch the plane take off and land from the beach.

On the way to the airport stop at Barra golf club so you can see how a sheep field has been converted into a sports venue.

There’s only one hill of note which is towards the end of the  route. Anyone of moderate fitness can bike up it. Park your bike at the top of the hill so you can walk up the hill to the statue overlooking Castlebay. Finish off the day with a fast downhill ride into Castlebay. 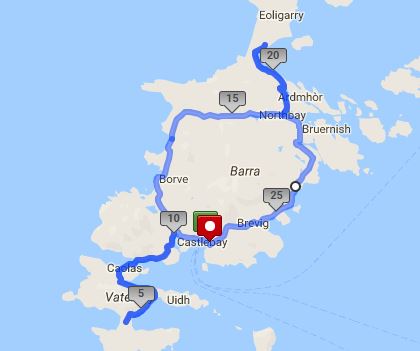 Day 2: Catch the ferry to Uist

I’ve never been to Uist but her brother in law has a house there so hopefully I’ll visit one day. I therefore can’t comment on the route until it gets to…

Day 3: This is a controversial choice but I’d argue not to  go the official way up the west coast but instead take the east coast. Heading south first means you can visit Rodel church. This is ancient church has one of earliest known representation of a man in kilt. Now a day there’s lots of men in kilts here. Its a very popular place to get married.

Next to the church is small pier which is the southernmost point you can cycle to on the Harris.

The west coast has some great beaches but the landscape of the east coast is unique to the island. A barren landscape of ancient rock and heather. The windy undulating single track road is great fun to ride.

Once you get off the east coast head for Luskentyre beach. The official route passes a bit of it but the best view can only be seen by heading along to it. If you want a challenge try running up the sand dunes. It’s hard work!

The island across from the beach is where the BBC filmed Castaway.

Finish the day by heading to Tarbert. There’s a long climb from the beach towards tarbert but once you get to the top its all downhill into the town.

Unfortunately Tarbert is at sea level and at the base of a hill, so today is going to be hilly no matter which way you go. I’ve added in some diversions off the official way.

Start by heading to Amhuinnsuidhe castle. At one point Madonna was going to purchase it, until she discovered the public are allowed to walk right by the windows. Robert Plant from Led Zepplin was also interested. He went for a pint in the local pub but the beer must have been bad as he never came back with a bid.

The road out to the castle packs in allot of interesting sights. There’s the ruins of an old whaling station, there’s stunning views of the harris hills and there’s the world’s most useless tennis court! It’s exposed to the wind and wild weather of the Atlantic.

From the castle you can walk up to one of the UK’s biggest cliff faces. The 600-foot cliff face of Sron Ulladale,

Head to Rèinigeadal next. Rèinigeadal had no road access until 1990; the only route in was along a hill path, or by boat. There’s a postman’s marked path from the village back to Tarbert. Imagine doing it carrying a load of Amazon parcels. It’s worth walking a bit of it as it has some spectacular views.

Afterwards head as far north as you can but there’s a convenient stop at http://www.locherisortinn.co.uk/

This sticks pretty closely to the Hebridean way path. Therefore you can read about it here https://www.visitouterhebrides.co.uk/way-finder/lewis-wf831

The main difference is I suggest not going to the official end of the route. The road to Ness is one of the most boring drives on the island. Vast empty moor as far as the eye can see. Instead head to Stornoway as there’s much better routes that you can do from there.

If you do want to know what the end of the route looks like then check this out. I was there on a very stormy day.

Give yourself at least a couple of days in Stornoway. From here you can do some great routes.

A flat out and back route to a lighthouse. From here you can watch whales pass by. On the way back a small detour will take you to a 15% hill climb! It’s short but hard. I needed a quick rest at the top! 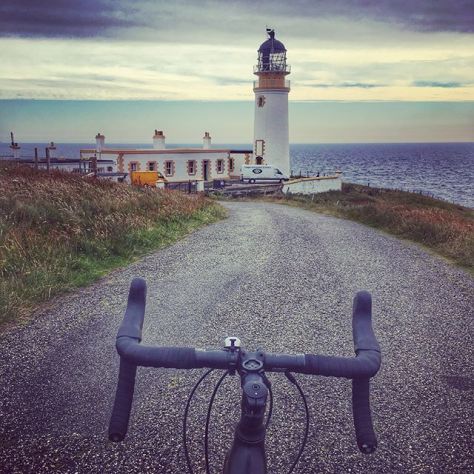 If you tire of road biking then a recently completed mountain bike trial has been constructed in the Castle Grounds. An area of forestry next to Stornoway.  I hadn’t tried it before and was pleasantly surprised at how good it was. There’s no major hills but lots of undulating tracks. It was a great way to pass a few hours. 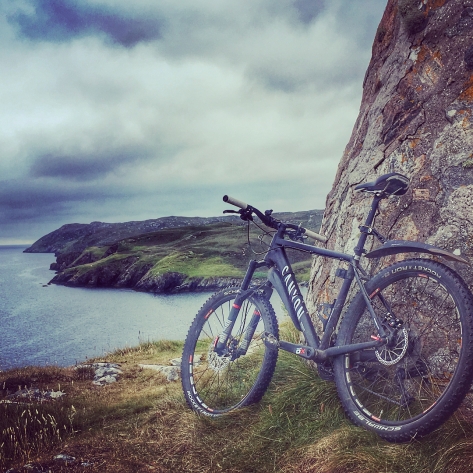 Tour De Tolsta: If you only do one route from Stornoway then do this one! The beaches along here are some of the best on the island. One of them even has its own waterfall

Originally the road to Tolsta was supposed to go all the way to Ness but it was never completed. Supposedly a local sightseer had predicted that if the road was complete then the “The day will come when the Isle of Lewis will sink beneath the waves.”

Which seems unlikely as how can a whole island sink? But, in 1995, the ferry to Ullapool was named the “Isle of Lewis”… There was no calls to complete the road whilst that ferry was operational! 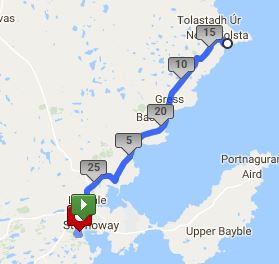 There’s some great swimming spots along the route. Coll beach is very popular with the Hebrides open water swimmers.

There comes a time in your life when you have to confess something to your partner. You’ll have struggled with the confession for weeks in advance. You’ll spend ages trying to get the correct phrasing. In the weeks leading up to ityou’ll use bribery and flattery to get your  partner in the right frame of mind to hear it.

But… eventually… you’ll have to confess – “I’m going on a biking holiday!”

You’ll then try to explain to your partner how your week long “training” trip to Mallorca or the Canary islands wont be fun. You’ll claim – nobody will be drinking!  You’ll say – we’re not going anywhere near Shagaluf…sorry Magaluf.  You’ll state – it’s all about the hills and the weather

So, to avoid all that worry, book a trip to the Western Isles. There’s amazing hills, amazing weather (on a good day) and if your partner asks about the pubs then you can says that the island’s have the highest rate of abstinence in the UK – just don’t mention that its also got the highest rate of drinking too!