The last time I visited Wales was eight years ago. I went down with my girlfriend (of the time) and a couple of friends. Our plan was to climb Snowdon. My two friends decided to run it, so my girlfriend and I walked and we agreed to meet our friends at the top.

We started walking and we soon came to a break in the path. It wasn’t clear which way to go so we choose the right hand path. After a short distance there was a sign that said “Crib Goch route”. I hoped Grib Goch was Welsh for ‘easy route’.

We weren’t confident about our choice but as there was another couple ahead of us we thought “lets follow them as they look like they know what they are doing”. However, the route started to get steeper and steeper until we were on all fours climbing a vertical wall -and, when we got to the top, we realised we’d climbed the wrong mountain. It wasn’t Snowdon. It was its partner, which I found out afterwards is called Grib Goch. It turned out Grib Goch was Welsh for, well… Grib Goch.

The only way back was down the vertical path we’d just climbed or along a ridge so narrow you couldn’t stand up on it. Either side of the ridge was a huge vertical drop. A fall on either side would lead to death.

Luckily, we made it across. Mostly on all fours while holding on for dear life. 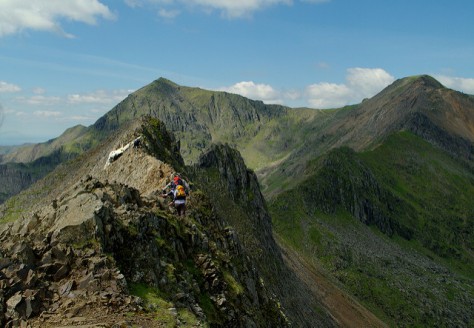 It was the first and last ridge walk I’ve ever done.

My friends laughed and then asked –

I didn’t have the heart to point out her error. It was too funny.

The swim was amazing. It takes place in a sheltered beach cove surrounded by the town. It comprises two loops of a triangle with an Australian exit. When viewing the course from the town I thought the hardest leg would be the middle section and the easiest would be the last. I was wrong. The easiest was the middle and the hardest the last.

I also thought the sea looked flat calm. It wasn’t. There was enough of a swell to keep the swim exciting/interesting/terrifying.

My sighting was good and according to my GPS I swam the same-ish route on both laps.

I was confident of beating Andrew as I’d swam in the sea more often him and I assumed he’d probably be slightly cautious.

If you do race it then I’d advise:
– Try to start near the front as there’s a lot of people taking part
– The course is setup for the whole weekend so you can have a practice swim at any point.
– Practice sighting. The markers are quite far apart so use landmarks instead. I used the house from Grand Designs.
– Book somewhere to eat for afterwards as the town’s mobbed with hungry swimmers.