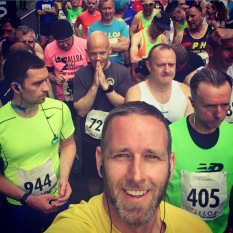 When I think about what Glasgow is famous for, I think Billy Connolly. When I think of Edinburgh, I think Edinburgh Castle. Aberdeen? Oil! Inverness? The Highlands. Dundee? The Beano! Perth? Farming.  Alloa?…..Alloa?…..ummmm….I can’t think of interesting thing about Alloa.

First of all, that’s a really boring thing to be famous for and secondly “some say” is a meaningless phrase. How many people say? Is it one person? One hundred people? One thousand people?

I could write “some say Iain is the greatest gift to Scotland since Mr Barr invented Irn Bru” even though no one has said it except me! Its a phrase used when no-one can think of anything true to say.

I see it allot at what I call “maybe places.” These are places, usually historical, where every fact is a “maybe” or a “some say” or a “could have been” ie a sign next to a castle might read “Maybe this was the kitchen where some say the king could have dined nightly.”

I’d rather the sign said “We don’t know what this room is for. We could take a guess but it would be no more valid an opinion than anything you might come up with.”

In fact, I’d prefer historians to make up something much more interesting when they don’t know for sure – “This castle might have been used as a home for the King’s giraffe. Maybe he called the Giraffe Tall Paul and rode around on it as a symbol of his awesomeness.”

Alloa doe shave something to be be famous for. Its half marathon. This was my fourth time running it.  Its a great event because:

This years race was held later in the year than normal. It should have been in March but was delayed due to Snow. There was a big turnout of runners but it was definitely quieter than normal. Usually the road into Alloa is very busy before the race but this time I drove straight in without having to queue once

At the start, I noticed a sign saying headphones (or similar devices) were banned due to health and safety. As I was reading the sign I noticed a commotion at the front of the race – the giant inflatable hanging above the start line had collapsed. It was lucky no one was hurt. Next year they’ll have to amend the sign to say headphones and giant inflatable start lines are banned due to health and safety.

The race much like Alloa had no points of interest. I started, I ran, I finished.

PS – I eventually found one interesting thing about Alloa.

“Part of Clackmannan’s folklore is a story about Robert the Bruce. He lost a glove there while hunting. Ever the thrifty Scot, he sent his lieutenant back to find it. “Go to a path near Clackmannan village,” he instructed him, “and look aboot ye.” The road is called Lookabootye Brae to this day”

One thought on “Alloa Half Marathon (Iain)”