The phrase “all work and no play makes Jack a dull boy” famously featured in the film The Shining. I thought the phrase was written for the film/book but it was actually first used in a book by James Howel in 1659. Little is known about James other than he worked with a man called Jack who was boring as f**k!

The phrase is equally true when applied to sport. Some people can be so obsessed with their running/biking or yoga that they have no other interests.

I know because I have been that boring bastard.

Back in 2012 I took part in the annual L’etape du Tour bike sportive. A race that allows amateur cyclists to ride a closed road stage of the Tour de France. It was my ultimate bike race. The one I needed to do over any other.

I became obsessed with race to the detriment of any other interest. I trained every weekend, I read everything there was to read about it.

I did the race and then….I became depressed.

I’d done my life cycling goal. Do I do it again? Do I do it faster? What next?

I thought maybe a different race is what I needed so I researched other big races. None of which excited me. I was still depressed.

Then I realized it. I wasn’t depressed. I was bored of myself. I’d become a one dimensional person. I was a biker but nothing else.

If I was bored of myself then Christ knows what anyone else thought of me!

So I vowed from that moment on to always vary my interests. For every sporting hobby, I have to have a non-sporting hobby too.

Since then I’ve tried stand up comedy (badly), acting (badly) and painting (badly) 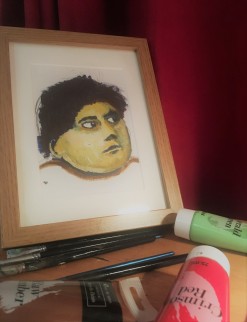 My art tutor taught me how to paint fruit and how to paint people so he shouldn’t have been surprised when my graduation piece ended up being a fruit that looks like a person!

Both my girlfriend and Andrew’s had nightmares after seeing what I’ve entitled – Lemon Maradonna. Which makes me slightly proud. At least its not dull.