10 years ago I was involved in a project that required 20,000 documents to be signed. I can’t tell you about the project as I had to sign the Official Secrets Act before starting on it. So… erm…. ignore that first sentence – let’s start again.

10 years ago ‘a friend’ who doesn’t want to be arrested for treason was involved in the project that required 20,000 documents to be signed…

At the end of the project, a man was appointed to sign all 20,000 documents. Before he could start, health & safety carried out a risk assessment. He was told he could sign for 20 minutes at a time before he had to take a 15 minute break. And he could only sign 10 times a day.

At best, it would take the man a month to sign his name on all the documents. At worst, if his name was ‘Adolph Blaine Charles David Earl Frederick Gerald Hubert Irvin John Kenneth Lloyd Martin Nero Oliver Paul Quincy Randolph Sherman Thomas Uncas Victor William Xerxes Yancy Wolfeschlegelsteinhausenbergerdorff Senior’,  the man with the longest name in the world, according to the Guinness Book of Records, it would take the rest of his life.

It was health and safety gone mad!

Which is a strange phrase. If health & safety had genuinely ‘gone mad’ it would make you ride a giraffe before signing your name. It wouldn’t try and prevent a repetitive strain injury through a measured and effective system of writing and resting. That’s not mad. That’s good sense.

Health & safety is a good thing but it gets a bad rap. The nanny state. Maybe it would have a better reputation if it had a better name? I’d call it the NSFW regime: the Not Safe For Work regime. Which I admit could be confusing if you want to watch a NSFW video. Oh my!

‘Mad’ health & safety rules don’t just apply to signing documents. They also apply to driving trains. In Glasgow, a driver on the Glasgow subway can only drive a train for 25 minutes too. Why 25 minutes? That’s the time it takes to go round the subway and, as the subway is an oval, the drivers get dizzy as they’re literally driving in circles all day*.

(*This may not be true. Someone told me this and it was too good to actually check the answer and have it debunked.)

On Sunday, Iain and I decided to carry out our own health and safety assessment by following the tube David Bowie style: station to station.

We had a simple challenge. We would start at one station and then we’d run to the next and the next and we’d follow them round in order of the tube map.

Which in the real world, still looks like an oval. 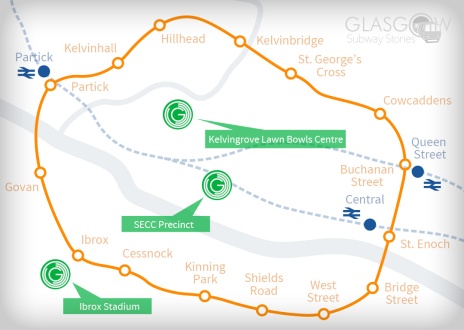 There is a drinking game version of this challenge. It’s called a “subcrawl”.

Subway + pub crawl  = subcrawl. Did you see what they did there?

On a subcrawl you have to travel round the tube and get out at every station and have a drink at the nearest station. From trendy bars in the Westend to big name city centre pubs, traditional tenement corner bars filled with Union Jack flags near Ibrox. It’s all of Glasgow seen through the bottom of a pint glass.

Instead, Iain suggested a healthier challenge.

Instead of drinking, we’d be running. We’d have a Glasgow subway + run = Glasgow Subrun (trademark pending). Did you see what we did there?

We’d start at St George’s Cross and we’d run clockwise to Cowcaddens, Buchanan Street and beyond.

Here we are at the first stop:

The first stop was easy, it was only a few hundred metres from the start. As were the next two: Buchanan Street and St Enoch stations, which sit on either end of the same street. After that the challenge was to find the stations.

The stations south of the Clyde are more spread out and less obvious to find with Kinning Park being the hardest to spot. We ran past it then had to double back to take a side road to find it.

We also had to run through the Clyde Tunnel, to cross the river. It seemed fitting. We were finally running underground.

It was great to see Glasgow in a different way and to find out which stations were closest (Partick and Kelvinhall), which were furthest apart (Govan and Partick) and which didn’t have an underground ‘welcome’ sign and spoiled our 15 selfies (Partick, we’re looking at you and shaking our fists!). It was also a chance to see how Glasgow changes from area to area, and how, in many ways, they’re just the same despite there vastly different reputations.

Why not run it too? And, if you want to run the #GlasgowSubrun then are the seven rules (I’ve just made up) which you must follow: 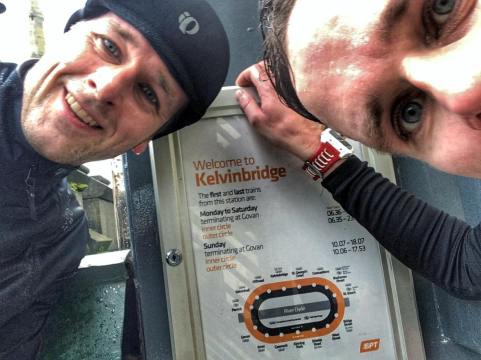