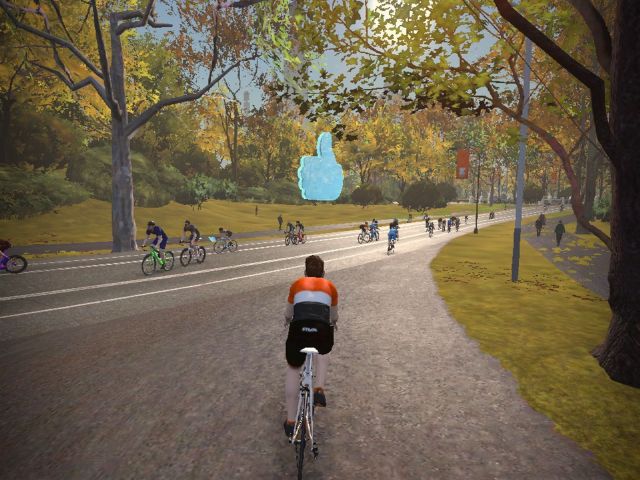 A few weeks ago I bought a smart trainer. Until then I had a dumb trainer, it would only do what I told it, and I told it to “woah – take it easy, there’s no need to go too fast!”

With the trainer sorted, I knew I needed a training programme that would help me ride smarter too. I had a look at a few but Training Peaks seemed to require a spreadsheet and Sufferfest had the word Suffer in it’s title and who wants to suffer? Harderfest maybe? PushYouALittleBitMoreFest? But not Sufferbest? You might as well call it Quitfest. ‘Cause that’s what I’d be doing…

Instead, I tried Zwift on an iPad linked to my trainer because it promised I wouldn’t suffer as I’d be using it like a computer game. And, instead of spreadsheets like Training Peaks, I’d see a wee rider cycle round New York’s Central Park and the centre of London. It would be like Mario Kart!

The first time I used it, I didn’t know what I was doing. My wee man on screen was surrounded by other riders. I tried to ride round New York’s Central Park and keep my speed around 20mph. And I didn’t get it. It was slow. The trainer would increase resistance as I rode up hills and I didn’t understand why because I’d just drop the gears to make it easier and then –

– someone shot past me and I thought “follow them!” and then

– a group formed around me and I was in a peloton and we’re all doing 25mph and I’m thinking “I can’t be dropped”.

– then I’m climbing a hill and a message is telling me that if I keep this pace I’ll be in the top 50.

And I think “Now, I get it!”. Zwift is for folk who need a bit of competition to motivate themselves. It’s a game of jealousy and better my neighbour. Even though you don’t know the people around you, you suddenly want to be better than them just because they’re real people too. You’re no longer training on your own. You’re not just Mario – you’re also racing Luigi!

Since then, I’ve spent around 10 hours on Zwift trying various routes and features. But, despite the ability to customise my wee man on screen, I’ve point blank refused to do so. I know I can change the colour of his socks but why would you?! This is Zwift not Barbiefest.

In a few weeks I’ll report again and see how a month of Zwift compares to a month of trying to cycle in Scotland in December.