… eat outside in Scotland in May when it’s bucketing and there’s no tables inside:

2 wallets stuffed into crack in table to create support struts.

1 golf umbrella cover wrapped round base to increase size and stability. 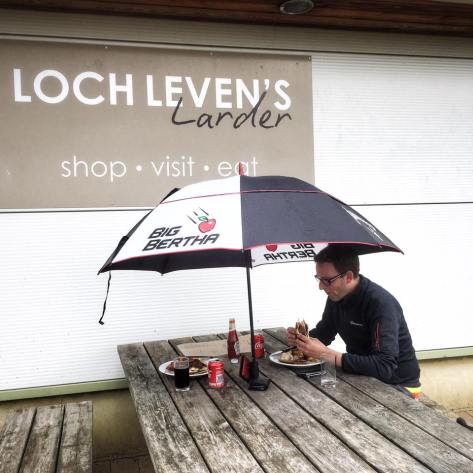 Have you ever run a half marathon backwards? Or any race backwards?

And by backwards I mean running the route in reverse – not running backwards yourself, looking over your shoulder and trying not to run into an oncoming car.

I have. The last time I was here.

For some reason, when we arrived at registration at Kinross in Fife, the organisers didn’t have my entry.

(I cannot comment on whether this may have something to do with me get my entry wrong in the first place and maybe not, you know, actually, kind of, maybe… entering. Though I swear I thought I had entered at the time.)

Since we were there and ready to start we thought we’d run the race anyway. But, because it wouldn’t be fair to join a race without an entry, we thought we run the route in reverse.

And everything was fine. The first few miles were quiet, the middle miles saw a flood of runners approach us, and the last few miles saw…. horrendous rain. Rain so bad that we thought it best to take a shortcut, leave the road and cut across a field to take a trail to Kinross.

The trail didn’t go to Kinross.

It didn’t go anywhere. It stopped beside Loch Leven.

So, we ran across another field.

A cow got mad.

We eventually ended up back at the road we’d left. Wet. Tired. No further forward.

We ran to the finish/start and checked our mileage – 15 miles, for a 13 mile half marathon ran in reverse.

There’s clearly a lesson here about always checking your entry before going to the start of a race. Either that or always carry a compass if you want to take a short cut.

That was around five years ago. The Caledonian Etape and Loch Leven Half Marathon moved to the same weekend and it became impossible to enter both (or not enter even).

This year the Etape has changed weekends, moved back a week and we were free to run the Loch Leven Half Marathon again.

It’s one of my favourite races. It has great views of the loch and the surrounding hills. It has some nice long descents and only a couple of longer climbs. Every few miles the view changes, starting in an industrial estate in Kinross, moving through fields, then Loch Leven, moving closer to the hills, climbing through Scotlandwell before finishing with farms, fields, rolling roads and a final couple of miles along a track back to Kinross.

It’s a great race and I’d definitely reccomend it – but I might only be saying that because I beat Iain.

I saw he was struggling. A few grimaces here and there. An inability to keep up when I tried to run faster. But I waited until mile 9 before seeing if it was just a faint.

It wasn’t. When I started to run faster, he didn’t try to keep up. I was able to run home without any competition for the final few miles, drawing the Todd Championship level with three victories each.

My only complaint was a warning at the start of the race. The marshall warned everyone not to listen to headphones: “This race is sanctioned by Scottish athletics and anyone wearing headphones may be withdrawn from the race.”

I like listening to headphones when I run, usually Podcasts, occasionally music, sometimes the radio.

I can understand that organisers want to keep runners safe. But banning headphones seems over the top. Why not just say that runners with headphones run at their own risk?

Which isn’t much, given that statistics showed that “SERIOUS ACCIDENTS TRIPLE WHEN WEARING HEADPHONES”, as one headline put it. Which does indeed sound serious, but it only involves 47 accidents a year in the United States, up from 16, eight years earlier.

Which is not to belittle the 47 accidents which occurred, but merely to point out that half of the accidents involved people struck be a train at railway stations (not somewhere you normally go for a run) and perhaps studies like these are not appropriate when judging people running on roads and trying really, really hard not be hit, especially if they’re running backwards!

Or at least change my Podcast to ‘Dan Carlin’s Hardcore History’ so at least people think I was listening to something a little bit more high-brow! 🙂