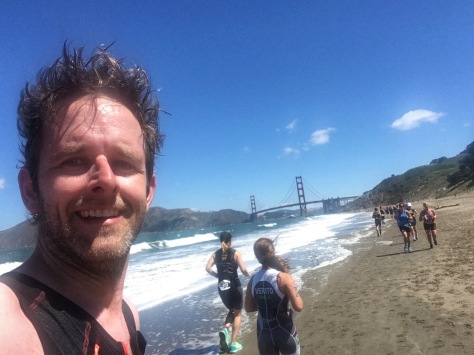 I can only imagine that Dr Steve Peters inner chimp wasn’t an editor.

If you’ve not read it then the basic theory goes something like this: everyone has a chimp, but not in a Michael Jackson type way. He had an actual chimp. We have an inner chimp. A voice in our head that reacts emotionally to events. The book shows how to understand how your mind works and how to ignore negative thoughts like doubt and fear.

It also tells you to ignore losing (which reminds me that I should really get a copy for Iain before next year’s Etape Caledonia) and that you should approach each event on the basis that you can only judge it on how well you trained and how well you raced and that position is not important.

Wise words for this year’s Escape From Alcatraz. After the swim was cancelled, I was disappointed, half thought of not finishing it. Why bother if it’s not the full event?

But that was my chimp talking.

Not that chimps talk. They just say OOOOK, which means “chimp wanna banana”, unless it’s Michael Jackson’s chimp talking in which case OOOOK means “get away from me ya big weirdo”.

Instead, I ignored my chimp and thought: “This is the race. There is no swim. You can only start what’s before you. You were on the boat. You were ready to dive in. You can’t do any more than what you’ve done. So, pull yourself together and get on that bike and get out and run!”

And it was brilliant.

Iain had loaned me a tri suit. Normally, I’d wear tri shorts and change and use a cycling top for the bike and swap t-shirts for the run. But, this time, I was going ‘full triathlete’.

I will not be posting any pictures from the race of anything other than my head! 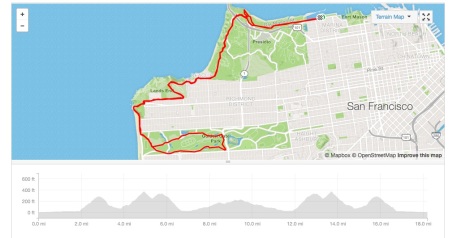 The bike course is out and back from transition to Golden Gate park. It’s closed road, which is fantastic, and his great views of the bridge, Lands End, the west coast and Ocean Beach.

The hills are relatively shallow, but I was surprised at the number of people stopping and walking up them. Maybe Scotland is better training for San Francisco than other places, but, if you are training somewhere flat, then practice for hills, the course goes up and down faster than Theresa May approval rating.

For those travelling from the UK, India, Australia, the Caribbean, Malta and Cyprus (and anywhere else that drives on the left hand side of the road), then watch out for overtaking. Americans overtake on the left, not the right. Which is more obvious when driving, the oncoming traffic being a big clue (!), but, on a closed road on a bike, it’s easy to overtake on the right, and some folk don’t like that. “Sorry!” to whoever I cut off at Cliff House, I don’t know who you are, but you certainly had a loud voice!

The final few miles are flat, and, with a windy day, gusts were hitting 35mph on Sunday, and with the wind behind, it’s a very quick finish. 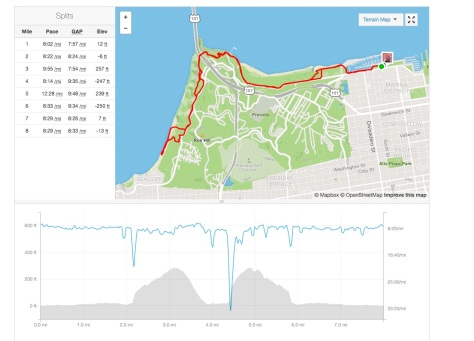 Let’s talk about hills. And steps. Hills are okay, you slow down, shorten your stride, switch your mind off and keep climbing. Steps on the other hand are made to be walked on. It’s automatic. See a step. Walk on it.

At least that’s my excuse for not running all of the run route. There’s two sections with steps. The first at two miles, where you climb steps up to the Golden Gate bridge and the second at 4.5 miles where you tackle the ‘sand ladder’.

I’d read about the ‘sand ladder’ before the race. I knew it involved a steep climb after a short run on a beach but I didn’t realise just how steep it was. (Ladder should have been a clue, it wasn’t called the step stairs, or the step easy incline, it was the step ladder). I didn’t even try and run it. I grabbed one of the guide ropes at the side and used that to help me climb.

Once those two climbs are done, it’s a nice two and bit mile run back to transition on flat ground.

I play a game as I run. At registration everyone has their age written on their left hamstring with a black marker. I don’t know why. Maybe the sharks in the bay want to know how old a leg is before they bite it off?

But, as I run, I check out people’s legs to see how old they are. Then when they pass I have a quick sideways look to see if they look older, younger or spot on.

It’s only at the end that I realise that everyone could be doing the same for me. Except they’d add, I’d thought at his age he’d at least be trying to run the stairs?

The finish line had a large crowd but one which was quite quiet. My wife was waiting and she said afterwards that people only tended to cheer athletes they knew rather than everyone as they came in. She also overheard the following conversation:

Mother: Because he’s just finished a big race and it’s a massive achievement!

Small child: Is it?

Mother: (After a long pause) Well, he thinks it is…

I think many triathlete widows and widowers can empathise!

At the finish, I get a big medal, a big meal (pasta, soup and various barbecue options) and a great sense of achievement – I could do no more than what I did, I was ready to jump, but better to be safe than to risk your life in dangerous waters. I’d escaped Alcatraz (albeit that maybe this year, the guards had left the keys in the lock to make it slightly easier)! 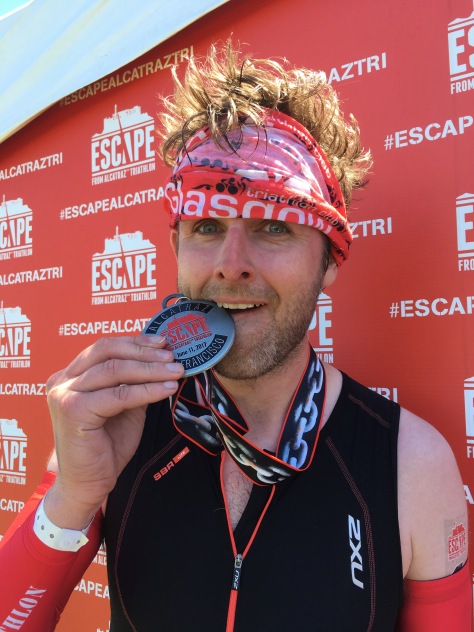 Registration is very busy between 11am and the first briefing at 1pm. You will need to queue. We had to wait 30 minutes in a queue that snaked all the way around transition. However, if you arrive later, the queue is much shorter.

You can’t take your bike into registration so, if you don’t have a handy wife/girlfriend/husband/boyfriend/partner with you, then you’ll want to bring a lock so you can leave your bike safely while you register.

Transition has security guards so leaving bike on Saturday is perfectly safe. You can’t leave your kit, so you will still need to prepare transition on Sunday morning but at least your bike is racked.

There are lots of buses on Sunday morning to get from transition to the boat, so no need to worry about catching the bus.

You can leave a bag at a collection point outside the boat but, if you leave it on the boat, you’ll need to wait longer on Sunday to collect it.

Unlike Norseman, where there a hose of seawater to help you acclimatise, you just jump straight into the bay. I recommend the (untested) frozen water bottle trick!

I hired a bike from Blazing Saddles. You need to bring your own pedals but they provided a helmet and seat bag with pump, spare tube and puncture repair kit, which was great. The store at 550 North Point Street is less than 15 minutes from transition, easy to get to before the race and easy to return bike afterwards. Excellent service and a wide selection of bikes to choose. Though order early if you need a specific size.